What’s Your Take? -New Mobility Magazine Selects Artie Abrams of Glee as its Person of the Year 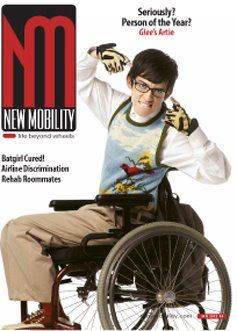 Nothing like a little controversy to get the special needs juices flowing. That’s what New Mobility magazine has generated with their cover of Artie Abrams from Glee as its Person of the Year.

For starters, Abrams is a fictional character on the ever-popular program, Glee. He’s portrayed by able-bodied actor Kevin McHale, who’s become a teen pop-phenom in a role that many actors with disabilities feel should have gone to someone with the cast member’s disability. In short, many believe that casting of such roles with able-bodied actors takes away the too-few opportunities to make a creative living by actors who live the realities of disability each day. I believe that’s the harsh reality.
On the other end of the discussion is the reality that the role, regardless of who’s in it, has generated huge awareness and discussion and perhaps greater understanding and acceptance of those with special needs by the millions of viewers watching the show each week, and that’s priceless.
So what’s your take? Should a television actor without a disability who’s portraying someone with special needs be honored in this way? Does Abrams/McHale’s performance and the attention to the subject matter warrant such recognition, or does this choice add fuel to the justification of taking away key acting roles from those with real disabilities? Weigh in. Raise your voice and write the editors of the magazine and tell them exactly what you think.
New Mobility editorial staff admits that their intention was to rattle cages and create controversy with their choice of the cover teen.
Mission accomplished.
Read the piece here.
Special Note: Lauren Potter’s role of Becky Jackson on the Glee has also become a phenom. Potter plays a character with Down syndrome, a disability the actress has.
Courtesy cover.
Judy Winter
Breakthrough Parenting for Children with Special Needs: Raising the Bar of Expectations
Winter Ramblings Blog
Flickr Page