The Plus Side of the Rahm Emanuel/R-Word Controversy 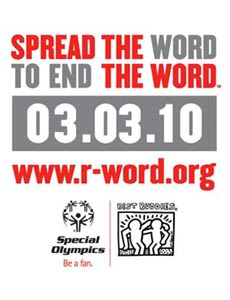 White House Chief of Staff, Rahm Emanuel, opened his mouth in a meeting last August and created a firestorm of controversy over use of the word ‘retarded,’ language use that has rightly infuriated many in the disability rights community, and created a media buzz that I’m quite sure Rahm wishes would disappear. His insensitive word choice came not that long after President Obama’s own joke on late night television at the expense of Special Olympic athletes. Both men have since apologized for their verbal “transgressions.”
Of course, there has been no shortage of loud naysayers quick to attack this challenge to free speech as liberal political correctness run amuk. “It’s just a word,” many proclaim, often behind the safety of anonymous screen names. But retard is much more than just a word. Use of this kind of language helps fuel outdated and limiting perceptions that get in the way of life opportunities for millions of people with a wide range of disability, and their families.
I know that pain firsthand. Although my son was bright and talented, his physical challenges and wheelchair use led far too many people, including educators, to predetermine his value and potential because they wrongly believed Eric was also mentally challenged. As a result, they expected even less from him. I’ve spent my life trying to right this wrong.
The R-word hurts in ways too many fail to understand.
The fact that it is so casually used today by many, including by the most educated, those in power and on reality television, shows just how far we have to go in creating greater understanding of the value and contributions of this population and the on-going human rights struggle they continue to face in 2010.
As in the case of Emanuel’s vent, the R-word is meant to be a put down, and each time it is used, painful stereotypes are kept alive and reinforced, making it even more difficult for those with special needs to pursue life independence and take their rightful places in society. It’s past time we recognized the need for important change in language use and life opportunities for this population, just as we have in the past for other minorities and women. It’s time we told their impressive accomplishments in our classrooms and history books.
On the bright side of all this, the President’s joke and Emanuel’s angry slip of the tongue, have helped place valuable increased attention, spirited discussion, and priceless media awareness on the challenges facing millions of people too often ignored and undervalued in our society. The struggles of those with intellectual disabilities often mirror those diagnosed with a wide range of other special needs, making this a critical moment for many. When it comes to greater awareness of those with disabilities, what impacts one, really does impact all.
Emanuel’s mistake resulted in a meeting with Tim Shriver and other special needs activists (read their statement here), an apology, and voiced support for a growing movement to end use of this outdated, painful and limiting word for millions, an effort being led by Special Olympics (highlighting it’s Spread the Word to End the Word Campaign Day March 3rd) along with a national movement to legally replace the outdated terminology ‘mental retardation’ with the term ‘intellectual disability,’ a change already adopted by Special Olympics and its talented athletes.
Whether the Chief of Staff really gets the magnitude of what he’s been called out on is unclear. But the White House controversy has helped highlight the concerns and voices of those with special needs at the highest level of government. That’s a good thing, and long overdue.
Now, let’s see what is done with the valuable lessons.
___________________
Special Note: Today’s Washington Post article by Michael Alison Chandler entitled Mentally Disabled People Campaigning on their Own Behalf explains the proposed language change from mental retardation to intellectual disability well. Click here to read the piece.
Logo courtesy of Special Olympics.
Judy Winter
Breakthrough Parenting for Children with Special Needs: Raising the Bar of Expectations
Winter Ramblings Blog
Flickr Page