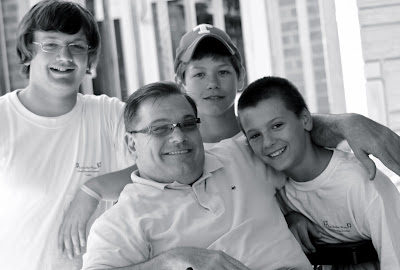 Update on my friend, Johnnie Tuitel, who was removed from a US Airways flight in September 2010 after they deemed the popular author/speaker too disabled to fly. Johnnie is now working with lawyers and legislators to change a law that currently prevent him from suing the airline for damages. He’s also creating a new Facebook page to support his venture entitled, Let Em All Fly. In case you missed it the first time around, I’ve included my original post on Tuitel’s air-travel fiasco below.

You can watch an interview on Johnnie’s latest advocacy efforts on behalf of all those with disabilities who fly, here.
Find out more about Johnnie Tuitel the man, here.
_______________________________________________________________
Former Post: October 15th, 2011
Just when I thought it was safe to take a day off from the blogsphere, a story comes up that hits far too close to home to ignore.
It’s a disturbing story about US Airways allegedly taking a man off a late September flight because he was deemed ‘too disabled to fly.’ An agent then advised the passenger that he could only take the flight with an able-bodied companion who could assist in case of an emergency, a policy stated on the airline’s website.
The man they removed from the aircraft is my good friend, Johnnie Tuitel, a motivational speaker, entrepreneur and author of the popular ‘Gun Lake Adventure Series,’ which features a child with cerebral palsy as its hero. The series is loosely based on Tuitel’s life. The author is a family man, a college graduate who has traveled by air 500,000 miles the past two years alone to make a living and help support his family. That family includes three great sons, all of whom volunteer each year at the camp I co founded to honor my son’s life called RicStar’s Camp. Johnnie Tuitel serves as our camp emcee each year, and as a powerful example of ability for the campers. This year, his unselfish actions earned him our 2010 RicStar Award for Outstanding Community Service.
I met Johnnie years ago. Once you meet him, you never forget him. It becomes easy to ignore the wheelchair. As a journalist who’d recently turned her focus to special needs parenting, I was immediately fascinated by Johnnie’s life story and his example of overcoming tough odds to live a productive life. Meeting him helped me see what was possible for my own son in light of his significant physical disability. I met Johnnie Tuitel at a time I most needed his example. Johnnie helped energized me for the advocacy work ahead. I’ve been forever grateful and we’ve become great friends.
After publishing a newspaper column as part of a series I did profiling successful adults with disabilities, I decided to also include Johnnie’s story in my book. His story and spirit are equally remarkable. Johnnie has spent his entire life challenged by the physical realities of cerebral palsy. Given his big personality, that’s not an easy reality. But Johnnie lives life to the fullest and doesn’t waste time on ‘why me?’ He forges ahead, as he will after this recent event. He’s smart, funny, hard working and charming, with a tremendous commitment to helping others as he heals from his own sense of loss of mobility. The author doesn’t believe life owes him anything because of his disability. That’s why this story hits so hard.