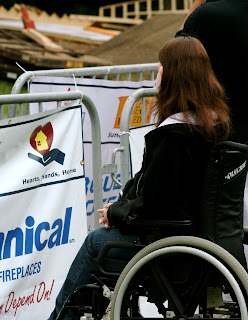 I’ve been on the lookout for a new spin for the on-going Extreme Makeover-Home Edition Michigan story that I’ve been sharing with you on this blog.
Well, ask and yee shall receive!
Here’s the amazing angle I’ve been looking for.  Thanks to Linda Mulholland for bringing this great story to my attention.  Watch for Linda’s son, Andrew, to appear on my Picture This! Faces of Ability– October. Posted soon. (photo at left from EMHE Michigan build, where special needs has been well represented).
________________________________________________
Through the remarkable medium of television, Ty Pennington and the entire Extreme Makeover- Home Edition team have done much to create valuable awareness of those with special needs, presenting the stories of these families with rare dignity, sensitivity and heart, while also giving several deserving folks some really cool new digs to live in.
The good that this show has done and continues to do goes beyond words.
Wait until you hear who has inspired a new project.
Twelve-year-old Jon Thomas Robertson of is a train buff, has been since his grandpa gave him his first model when he was very young.  Jon’s love of trains has inspired him to raise money to take his class on annual train rides.  But when kids with special needs were recently turned away because the train cars are 100 years old and not accessible, Jon got mad.  Then he got busy.
I always say that kids are the greatest teachers.
This remarkably, enterprising young man wrote his hero, Ty Pennington, and asked the show to help make the train in his town accessible to kids with special needs.  On Sept 16th, Jon’s wish was granted live on ‘Good Morning America’ when Ty showed up with some of the design team and promised to fix the accessibility issues.
I especially love this story because my son, Eric, a wheelchair user, got to ride a similar train on a class field trip and was thrilled, as was I. But as always, such inclusive efforts required prior planning in order to ensure being part of a fun activity so many others easily take for granted.
Here’s the link for the heartwarming story ‘Boy’s Dreams Won’t be Derailed,’ by Brian O’Keefe, along with the ‘Good Morning America’ video with Jon and Ty. Leave it to a child to do what needs to be done without being derailed by ego, partisanship or posturing.
Maybe we should send Jon to Washington….
Watch, learn, and cheer! (and VOTE on Nov. 4th!)
Jon Thomas Robertson, you are a Real-Life Hero!  BRAVO!
http://abcnews.go.com/GMA/SmartHome/story?id=5809423&page=1
JudyWinter.com
Breakthrough Parenting for Children with Special Needs: Raising the Bar of Expectations