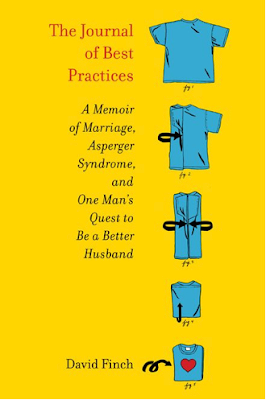 David Finch wrote a New York Times essay, Somewhere Inside, a Path to Empathy, that included his take on being an married adult with Asperger syndrome. His words became the basis for his new book, The Journal of Best Practices: A Memoir of Marriage, Asperger Syndrome and One Man’s Quest to be a Better Husband. Finch was first diagnosed with higher-functioning autism five years after he got hitched to Kristen, a speech therapist. The book chronicles how the diagnosis has impacted their marriage and his life.

Dave Barry, author of ‘I’ll Mature When I’m Dead: Dave Barry’s Amazing Tales of Adulthood,’ writes of Finch’s book: “His often-hilarious efforts to understand and cope with his condition will resonate with every guy whose wife has ever asked him, “What the hell were you THINKING?”
I think this is only the beginning of such stories about new adult diagnosis. Wonder how many relationships and marriages Finch’s words might save, and how many adults will see themselves in his diagnosis. Probably more than one woman will be saying to herself about her husband, “Okay. Now I get it.”
Read more about Finch and his work here.
Courtesy image.