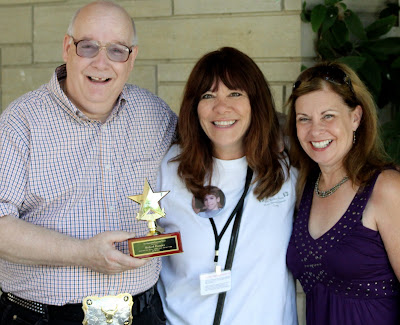 A story worth revisiting.

Of all the inspiring special needs stories that I have heard or told during the past twenty years, and there have been many, few have touched me as much as the life story of Richard Prangley.
Prangley was wrongly institutionalized as a child and labeled a ‘low-level imbecile’ and ‘unable to learn’ by professionals. What Richard experienced after being committed by his family at age six to the former Coldwater State Home in Michigan is both horrific and inexcusable. But what this man has done since being freed from that setting at age 21, including becoming a passionate lobbyist for the developmentally disabled at high levels, is nothing short of remarkable, and a real tribute to the power of the human spirit to triumph over the toughest life circumstances.
Richard’s story was first skillfully and honestly captured in 1998 by popular Lansing State Journal (LSJ) columnist, John Schneider, in the book ‘Waiting for Home: the Richard Prangley Story.’ The two men have remained close friends since the day they first met in the LSJ newsroom more than thirty years ago.
You can view the two-part feature of Richard’s remarkable live story on YouTube, here. Thanks to Elizabeth Kelly of the PBS program, ‘A Wider World,’ for doing an outstanding job translating a fascinating and complex life story for television.
I’m blessed and honored to call Richard Prangley, John Schneider and Elizabeth Kelly my friends. I’m thrilled to have been part of the effort to bring this inspiring story to the PBS program ‘A Wider World,’ and happy to share it with you on this blog.
Richard Prangley is one of the finest human beings I’ve ever met, and he has much to teach us all about the power of forgiveness and true faith. I suggest you share his story with everyone you know, and refer to it when you need a boost in your own daily life, especially when challenged by the daily realities of special needs.
I do.
Photo: Richard Prangley, Judy Winter and Elizabeth Kelly at RicStar’s Camp 2010, where Richard received the ‘RicStar’ Award for Outstanding Special Needs Advocacy.
Judy Winter
Breakthrough Parenting for Children with Special Needs: Raising the Bar of Expectations
Winter Ramblings Blog
Flickr Page