Special Needs Shout Out (& Kudos to Oprah)! – Zach Anner Gets OWN Show on Oprah Network! 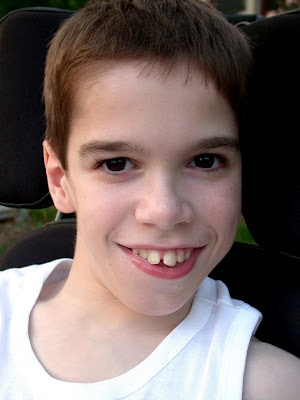 If you follow my blog, you know that I’ve been routing for Zach Anner to win YOUR OWN SHOW, a competition on the new Oprah Winfrey Network, I’m thrilled to report that last night, that’s exactly what happened. (You can read my last ramble about Zach here).
Zach Anner first created big buzz and got himself known on YouTube where he quickly became a sensation after entering the initial OWN competition online. The 25-year-old Texan pitched O his travel show, ‘Rollin’ Around the World with Zach Anner,’ to explore the challenges of traveling with a disability and/or financial hardship. Zach has cerebral palsy and uses a wheelchair. He’s also clear speech, mucho charisma and confidence, a great television smile, and real talent, and when he turned the tables on his interview with Oprah Winfrey last week and asked her some big questions, the contestant also appeared fearless. Brilliant move.
Zach shared last night’s top prize with his final competition, Kristina Kuzmic-Crocco, because Oprah had trouble deciding on just one winner, in part, because of her concern about Zach’s physical stamina and a grueling, on-going television gig. She also challenged Zach to go beyond his obvious ability to be funny and share more of who he really is, the richness of which she stated she had already experienced during their interview together. As the program came to a close, Oprah admitted that she’s never met anyone like Zach (loved seeing that lightbulb come on for a media giant no longer easily impressed). She said the young Texan had helped all the cast and crew to truly see beyond the wheelchair. Mission accomplished.
Zach stated his own concern that he not win this competition because he uses a wheelchair (no pity votes, please) , but because he deserved to be there. Zach skillfully proved his point and got his show, while helping change some outdated perceptions about disability each week. That’s an honest win I can fully support.
My hope is that as Zach is now further interviewed by Oprah and other top media, people will also check out his family and get the story behind the story. I’m convinced that this talented, confident and smart young man did not get to be who he is and where he is today without good parenting and a great family. My hope is the lessons and positive special needs examples continue as we pursue the whole story of Zach Anner. There is much to learn and share.
My son, Eric, would have loved every bit of this story, and Zach Anner.
Congratulations, Zach on this remarkable accomplishment! Yours is a success story for the special needs history books that still need to be written and shared. Just sayin.
Watch the show pilot preview from last night’s final competition here.
Photo of Eric Winter by Judy Winter 2011
Judy Winter
Breakthrough Parenting for Children with Special Needs: Raising the Bar of Expectations
Winter Ramblings Blog
Flickr Page