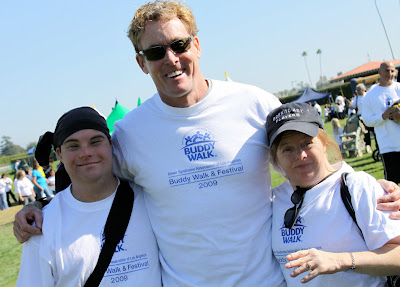 John C. McGinley is famous for playing the role of Dr. Cox on ABC’s hit show, Scrubs. But he’s quickly becoming almost as well known for his special needs advocacy efforts, including a key role in the Spread the Word to End the Word campaign, and other efforts promoting the dignity of those with intellectual disabilities . McGinley’s son, Max, has Down syndrome.

Kudos to the actor/dad for using his celebrity for such valuable advocacy efforts, efforts that help improve life opportunities for millions with special needs, including his own son.
Read McGinley’s take on the importance of the end-the-word campaign in the Huffington Post here. Sign the pledge to stop everyday use of the r-word here.
Photo of John C. McGinley, National Buddy Walk Spokesman, and his friend and mine, actor Blair Williamson & girlfriend, Susie, at the 2009 Down Syndrome Association of Los Angeles (DSALA) Buddy Walk at the Santa Anita Racetrack, California. Judy Winter. Used with permission.
Judy Winter
Breakthrough Parenting for Children with Special Needs: Raising the Bar of Expectations
Winter Ramblings Blog
Flickr Page