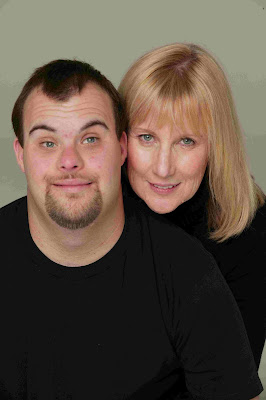 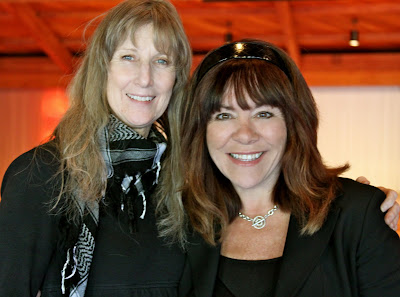 If you’re a regular on this blog, you’re probably familiar with my on-going posts about the work of Gail and Blair Williamson, who are also profiled in my book. So, I’m not going to repeat everything I’ve posted in the past.
Suffice it to say that this mother and son are two of my favorite people in the disability rights world. They’re doing great things each and every day for the special needs cause, and they’re my choice for Day Six of Special Needs Kudos.
Kudos well deserved.
___________________________
TWELVE DAYS OF SPECIAL NEEDS KUDOS 2010 -DAY SIX/ GAIL & BLAIR WILLIAMSON:
Gail is executive director of the Down Syndrome Association of Los Angeles (DSALA), a terrific resource for families of children with Down syndrome in the Los Angeles area.
DSALA also houses the Heart & Halo Talent Division, which helps actors with Down syndrome find work in the industry. Gail’s impressive commitment to increasing greater awareness, understanding and employment of actors with DS in the film and television industry is to be applauded and began long before she took on her valuable DSALA role. Gail is former director of the Media Access Office for employment of actors with special needs for the State of California.
Williamson is considered a key resource on disability (and a national speaker on such employment issues) by the Hollywood entertainment industry and beyond. In 2009, Gail was recognized for her outstanding advocacy efforts on behalf of those with Down syndrome with the National Down Syndrome Congress (NDSC) President’s Award.
Gail’s talented son, Blair, is a successful working L.A. actor who has appeared on such popular programs as CSI, Nip/Tuck and ER, as well as a number of other top-notch projects. Blair has Down syndrome, and each time he appears in the media using his talents, he helps change outdated images and perceptions about what those with disabilities can do. He’s a natural.
Theirs is a fascinating, inspiring tale of special needs parenting success, ground-breaking/far-reaching advocacy, and even some tales of growing up in old Hollywood (Gail).
Learn more about Gail Williamson, DSALA & its Heart & Halo Division click here.
Find out more about Blair Williamson here.
Photo courtesy of Gail & Blair Williamson. Used with permission.
Bottom photo of me with Gail Williamson in Santa Barbara, CA.
Judy Winter
Breakthrough Parenting for Children with Special Needs: Raising the Bar of Expectations
Winter Ramblings Blog
Flickr Page